Keith and John, here’s four little words that could help save your careers.

Seriously. When I’m watching the opening ceremony of the Commonweath Games and a door opens on the flying Tram, I don’t want to hear the two of you idiots talking over the top of each other with insightful stuff like:

– It seems to be a tram. With wings.
– Yes, it’s a flying tram. Sensational.
– It’s spectacular, isn’t it? I was on a tram several times today. In the great city of Melbourne.
The tram door opens
– Spectacular. The doors are now opening.
– Yes, John those doors are opening. Here in Melbourne. Magnificent.

Etc etc etc. These two must be getting paid by the word, because they just couldn’t shut up. What looked to be a spectacular opening to the games was utterly ruined for NZ TV audiences because two ex-rugby commentators (let’s face it, if they were still any good, Sky would have got them by now) thought we were watching it on Teletext. Sometimes the pictures can talk for themselves, chaps.

First, if you’re fool-hardy enough to attempt driving to Hamilton for a 7.30 kick off, leave central Auckland earlier than 4.45.Second, when you get to the general Rugby Park area at 7.20 wile driving, looking for a park and talking on the phone simultaneously, stressing out will help exactly no-one.

Fourth, Ticketmaster are utterly incompetent. By the time I reached the (single) pick up point, there was a massive queue with at least a couple of hundred people missing all the game at that point.

Fifth, after Dad’s heroics in the queue it was a huge relief to get to our seats, with Girl, Mum and Dad and N+J safely in tow. We were in the new (Brian Perry) stand, with its great sightlines, and typically easy access to booze and deep fried food. I was driving to the Mount for the weekend, afterwards, so only two Waikatos for me.

Sixth, we were lucky enough to sit behind a bunch of guys that were PISSED, and kept us entertained through the match by a) throwing bourbon and coke on each other b) loads of top class swearing c) spending long periods of the match in the bar d) falling asleep. I though they were going to be annoying but they turned out harmless enough, and like I said to the others, ‘hey, we’ve all been there’. Being shitfaced at the rubgy is as kiwi as thinking Greg Chappell is a wanker.

Seventh (I can’t be fucked counting any more) – It was a great game to be at. I’ve seen a few Canterbury v Waikato matches recently (including the stormer in the 2002 NPC where Waikato beat the All Blacks) and this one was right up there with them. The Crusaders were very, very good, and I think we did tremendous to keep up and almost nick it. Their defense was everywhere and took all the Chiefs could throw at it – though I would have liked to see Luaki have a go more with a had of steam up, instead of running off that stupid half step thing he does.

The Waikato defense was also impressive, save the first ten minutes (and I wasn’t even in the ground at that stage, so it doesn’t count), with Gibbes and Tuitupou
making huge hits. Still, the Crusaders showed in the final five minutes when the Chiefs had two huge chances to nick it why they’re champions – we cracked under the pressure, and threw that crucial last lineout in crooked. It’s like we were beaten by the Crusaders’ very reputation.

Other things:
– Can we have less ‘We Will Rock You’ played on the sound system? We get it. And playing the Feelers’ (shit band) “Stand up and be counted” when we went behind was a dick move, but I hate music being played at sport grounds in general.
– The Chiefs cheerleaders are HOT this year.
– McCaw and Holah are both huge.
– I saw Graham Henry and Brian Lohore under the stand looking very relaxed and smiling and nodding to punters afterwards while they waited for the crowd to piss off so they could go home. Could you imagine this happening in any other country? 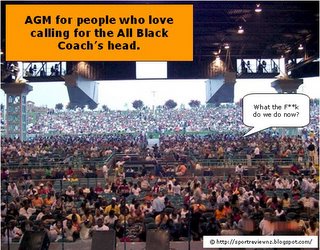 Nor rilly that topical, but hey, what can you do?

Or do I? Abramovich may be football’s version of a fairy godmother, but how would you feel if your team was cast as the bad guy against Barcelona – a team that plays outstanding attacking football? I’d almost support Barca over my own team. Chelsea will win the league, but they’re doing it in such a joyless, dull manner, broken up only by whinging and diving that everyone enjoyed watching Barca beat them with a side dish of schadenfreude.

At least when Man Utd (the last team it was fun to hate) were winning everything you could appreciate their football. Mourinho had the chance to build one of the great entertaining sides with all that cash (kind of like Barca, in fact), but he went with the one-nils instead. I hope him and all these fans who’ve come from nowhere are really enjoying it.
link