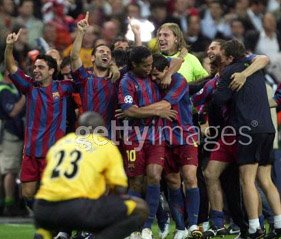 Possum turned up at Eden Park on Saturday night. Normally busy threatening Waikato Stadium with his chainsaw from the relative safety of a cherry picker bucket, he appeared in the South Stand in the second half to mingle with his public.

It was like the Pope turning up in a Dublin bar, within seconds he was offered a beer (which he took in a flash), had shook everyone’s hand, and posed for photos (You’re Possum! I love you!) with his fans. And then he was gone.

In this day and age of professional rugby, where the Blues have a (feckin)Pirate running around Eden Park (because the market research says you just gotta have a mascot, the target demographic LOVES mascots), it’s nice to know crazed fans like Possum are around.

Now Waikato just need to go back to the two-man-pantomine-horse-style Mooloo, then I’ll be happy. 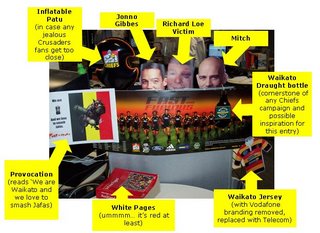 My work is having a competition to decorate your desk in the colors of your favorite Super 14 team. Here’s mine, I’m going for the short on effort, long on imagination approach, which will either win me all the money or feck all.