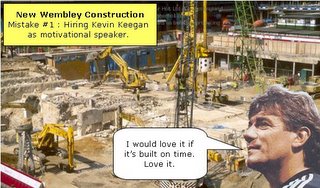 Here’s my entry in next week’s Guardian Gallery photoshop competition – they want you to show where it all went wrong in building the new Wembly.

I used to love Newcastle and Wor Kev, but seeing him go troppo ‘cos Fergie was stopping him sleep at night was the best ‘I’m losing it’ moment I’ve seen in a post match interview, ever.

I’ve often been tempted to keep notes on stupid things commentators say, but I always thought shooting fish in barrels was kind of sadistic.

Mark Nichols, the plummy English guy that’s somehow got onto on the Channel 9 team is pretty up there at the moment (“Out! Out! Out!”), as well as any English football commentator whose name isn’t Martin Tyler.

This is typical: “Well, Southampton v Everton here on this freezing Tuesday night in December is proving to be a white knuckle ride of a lifetime, proving once again that the Barclays’ English Premier League is undoubtedly the best league in the world, ever. And if you don’t agree you’re obviously a retard”. “Yes, I’ve just pissed myself in the excitement of it all, Brian”.

But NZ’s own Keith Quinn pulled one out of the bag during the Wellington Sevens, during one of those interminable ‘let’s pan around that crowd! Blimey, they’re all dressed up, fancy that!’ moments. The camera lingered on a blonde woman wearing a skimpy ‘Hooters’ singlet (leaving little to the imagination) talking on her mobile phone, and the doyen of NZ rugby commentary chipped in with:

“I wonder who’s on the other end of that call.
Some lucky.
Person.”